I’ve spoken recently about trying to #CutTheWrap this Christmas and thought I would take this chance to share some of the ways I’ve done that. I don’t know about you, but I actually found it really hard to visualise some of the ideas people online have been talking about, without actually seeing a picture.

So, here are some pictures! 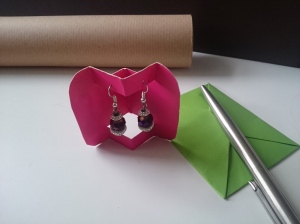 Some of you may remember my talking about buying second-hand earrings and making my own displays for them. Above is a picture of the finished article – the card the earrings are hanging on is the back of an old calendar which I used to wrap other gifts, whilst the tiny envelope is a sheet of my eldest’s origami paper.

Above is a second-hand silk scarf and a vintage book – I picked both up from my local thrift shop for an absolutely tiny price, then used one to wrap the other. To do this, I used Furoshiki – the Japanese fabric wrapping technique. I have to say – this is a total game-changer for me. I’m going to slowly invest in some second-hand scarves over the next year and use these to wrap my family’s gifts every year from now on.

Here are some gifts wrapped in old music, but you could use maps, or anything else which has a hypothetical expirey date. Arguably, this sheet music could have been put to better use at a charity shop, but it’s an exam piece for grade 2 treble clef trombone – a test I sat in around 1996. As the music changes fairly regularly, this isn’t really going to be useful to anyone…

…Especially as I spilt Ribeana all over the piano accompaniment as a terribly clumsy 11 year old. Honestly, I don’t know why anyone imagined the trombone might be an instrument I should play… 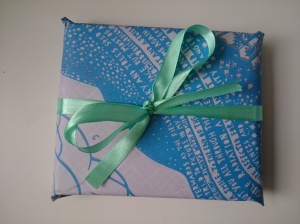 The calendar features again – this time, one of the pages, tied with the annoying shoulder ribbon from the inside of a shirt….

This year, instead of individually wrapping the gifts for my long-distance friends, then posting them in a large outer box, I decided to use the packing paper as the gift wrap. If I’d had more time before the kids came home from school, I would probably have tried to draw a city scape – you know the ones with the gable ends facing out which look a bit like Amsterdam? But time was of the essence so I did a hasty self-portrait instead, instructing my friend to open the card but not the package.

Honestly, I’m sort of wishing I’d waited until the kids were in bed to do the one above because I’m not super happy with it, but never mind. It’s done now and making its way to the intended recipient.

I would love to see any attempts you’ve made to #CutTheWrap – it’s so nice to admire all the creativity that’s out there.

2 Replies to “#CutTheWrap – what does low-waste gift-wrap look like?”