When we initially sat down to take stock of what we were throwing away, one item stood out above the rest – snack packaging.

I’ve always been a baker, so cake-packaging was never particularly prevalent, but chocolate bars and crisps featured heavily. Happily, there are lots of chocolate bars out there which come in paper and foil – everything from Green & Black’s Organic, to Lidl’s most basic line. The other expenses of the week dictate which I choose, but the Lidl ones are really good for cooking with.

Anyway, though I love chocolate as much as the next person, there comes a point when you want to have something… other than just chocolate.

Obviously, alternative snack options include the usual unpackaged suspects – fresh fruit, homemade pop corn (ideally from a refillery, but even in a plastic bag, the packaging is vastly reduced), and home bakes are all excellent. Sometimes though, you just want to eat trashy sweets that remind you of your childhood.

So what are your options here?

Well, chocolate fudge is incredibly easy to make. You need:
-500g of chocolate
-a can of condensed milk.

You melt the ingredients together (either in a pan, slow cooker or bain marie), allow the mixture to cool and then slice into blocks. At this point, you can eat it as it is, or cover the blocks in chocolate and enjoy a homemade Fudge bar. All of the ingredients’ packages are fully recyclable, and if it isn’t eaten first, lasts for quite a while in the fridge. 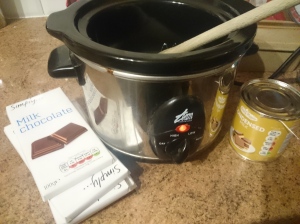 The other pre-packaged chocolate that’s surprisingly easy to make is honey-comb/Crunchie/cinder toffee. It took me years to attempt it because… well… it just doesn’t seem like the sort of thing you could make at home. I wish I’d tried sooner, though.

I followed this recipe, then dribbled chocolate over the top. I’m considering buying a silicone mould so I can make actual bars of this – it’s absolutely delicious. The ingredients come in metal tins (golden syrup), paper (sugar), and recyclable plastic (bicarb), though the bicarbonate of soda can sometimes be purchased in a refillery, or in bulk online. I buy huge quantities at a time because I used it for cleaning, bath bombs and cooking, which reduces the quantity of waste this produces.

I would love to be able to show you some beautiful photos of these things when I finished making them, but they didn’t last long enough for that. They were consumed within minutes. Literal minutes.

My next step in eliminating snack waste will be to attempt making my own crisps. I have a deep fat frier, but before I get involved in that whole endeavour, I want to try out baking potato skins.

Are there any other recipes you know of to replicate store-bought snacks? I’d love to hear them.

One Reply to “Low waste treats”