A bit of a different one this time (compared to ‘reduce‘ and ‘reuse‘), because I’m not going to talk about how to recycle. I’m going to tell you not to.

Recycling is great – don’t get me wrong – but people tend to act as though it solves all of our waste problems and it really, really doesn’t. Yes, it takes less energy to melt down a plastic milk bottle and make a new one than it does to extract oil, turn it into to plastic and then make it milk-bottle-shaped, but it also takes much less energy over time to just keep reusing a glass milk bottle instead. And glass can be recycled indefinitely so is less likely to end up in landfill/the sea at the end of its useful life. And if it does, it’s less likely to cause harm throughout the food chain. 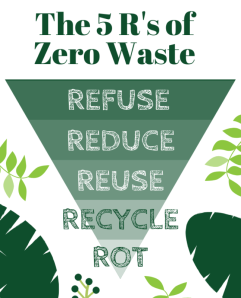 So, remembering the 5 Rs, we can see that recycle is the penultimate step. By the time we get to this stage, if we’ve been doing our job properly, there shouldn’t be an awful lot of food-related or general recycling left.

So what about the things which are?

Well, when trying to dispose of larger objects – cot mattresses, furniture, carpets etc. – I try to pass them on via Freecycle. Interestingly, if they don’t find new homes through this site, they tend to via the ‘Freebies’ section on Gumtree, or – back when I used the platform – Facebook marketplace. I don’t know whether this is simply because people don’t expect something for nothing, but for whatever reason, things which won’t move on Freecycle will go on Gumtree.

For smaller items which aren’t collected as part of kerbside pickups, it’s worth checking on Terracycle. There are various collection points for hard-to-recycle goods throughout the country so seeing if there are any near you is a good start. For those with a few more spare pennies, you could invest in an ‘All-In-One’ zero waste box but – fair warning – they are an investment. The smallest option is over £100 so this does price it out many budgets. I don’t think it’s something that I’ll be doing, but it’s always nice to see that the option is there.

For a lot of objects, however, thinking outside of the box is required. When we cleaned out the bathroom at my inlaws’ house we excavated a lifetime of spectacles, stacked in neat, sedimentary layers in the cupboard. On the off chance, I asked my optician back in the UK if they could do anything with the collection. Surprisingly, they could! There are actually lots of options for old eyeglasses, some of which are listed in a Metro article here.

Obviously, there are so many things we could talk about disposing of here – pens, scissors, cutlery… the best place to start would be to make a list of the things that you’re disposing of, either regularly or irregularly. After you’ve safely/responsibly disposed of said item, it’s worth having a look at your list and checking out the alternatives that are out there.

Using the example of our sieve, which broke the other week:
– I tried to fix it.
– I tried to look for a way to recycle it (but couldn’t find one).
– I threw it away and tried to live without one. I struggled.
– I did some research as to what alternatives there were. Whilst I could buy a sustainable, fair trade wooden sieve, I wanted something that I wouldn’t have to replace in the future so I looked up industrial cookware on eBay and found a set of 3 used sieves for £25.

Whatever you’re throwing away, take a good look at it first. If you can’t mend it, try to live without it, and if you can’t do that then buy to last. This is the theory that the website (and attached book) Buy Me Once is all about.

It’s also worth noting that some companies will accept their products back. The first example which springs to mind is the oral-hygiene supplier Brush’d. The toothbrush heads we purchased from there came with a stamped, self-addressed envelope which makes it super-easy to recycle the heads. It’s really encouraging to see more companies doing this sort of thing.

Obviously, if you can find alternative products to your usual choices which don’t need recycling then that’s even better – pencil highlighters instead of plastic ones, pens with refillable ink cartridges instead of disposable ball-points, online magazine subscriiptions via the library… there are all sorts of more sustainable solutions out there.

I really hope this was helpful – it’s a hard topic to write about! I’d love to hear what you think – either here, or on Twitter.